What is the Largest Living Virus

Viruses are tiny infectious agents that live inside living cells, which is the only place they can replicate. Viruses can infect any organism, from humans through to single cell bacteria. They are best known as the cause of many human diseases, such as the common cold and influenza. Viruses are usually considered to be a form of life because they carry genetic information, reproduce and evolve. They are made up of genetic material (RNA or DNA) and molecules that carry this material, along with a protein coat to protect the genetic information. Viruses can be many shapes, including complex forms. Viruses are very small, about one hundredth the size of a bacteria, and most are too small to be seen with a common microscope. Let’s find out which virus is the largest ever to be discovered.

What is the largest living virus?
In October 2011 researches announced the discovery of the largest virus known to date. This species is called Megavirus chilensis (named after Chile where it was found). It has a protein shell (capsid) diameter of 440 nanometers, which is 50 nanometers larger than the second largest virus ever discovered (Mamavirus). It also has 75-100 nanometers of capsular material on the outside of the protein shell. However, even at this size the Megavirus cannot be seen with the naked eye. The protein shell is hexagonal in shape. The Megavirus also has the longest genome length of any virus along with the most genes of any virus. It is not yet known which organism the Megavirus uses as a host. The following is a picture of the virus as seen through an electron microscope. 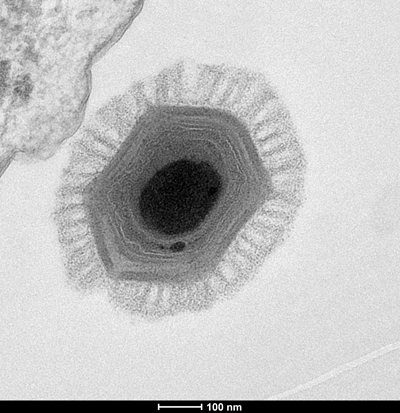 The second and third largest viruses (Mamavirus and Mimivirus) both have a protein shell which is approximately 390 namometers in diameter. They also have protein filaments (that resemble hair) that project out about 120 nanometers from the virus. They are also hexagonal in shape.

What is the Largest Living Bacteria

How Do Viruses Reproduce