Where do Aardwolves Live

The aardwolf is a small mammal that belongs to the same family as the hyenas. They are very similar in appearance to the striped hyena. However, unlike hyenas the aardwolf does not prey on large animals, instead it eats mostly insects. Their favorite food is termites, which they catch with a long sticky tongue. The aardwolf is a shy, nocturnal animal and they come out at night to find food, while they rest in burrows during daylight hours. The name aardwolf comes from the Afrikaans / Dutch language and means “earth wolf.” Let’s find out more about where this interesting mammal comes from and what habitat it prefers. 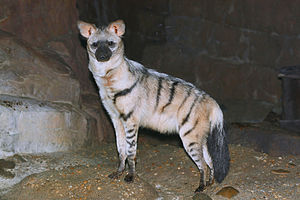 Aardwolves prefer to live in dry, open plains and bushland areas. They are not commonly found in mountainous areas. They have very specific dietary requirements and this means that they are only found in regions where termites of a specific family (Hodotermitidae) occur. These termites are only found where there is dead or withered grass, such as is found in grasslands and savannahs.

Aardwolves live in dens and, although they are able to dig their own dens, they prefer to use the dens of other animals.

Did you know?
Aardwolves live in pairs with their young. They have defined territories and will chase any aardwolf that enters their territory. However, if food is limited up to three pairs will share a single territory.

The aardwolf is relatively safe from threats, although they are sometimes killed by humans due to the mistaken belief that they prey of livestock. However, they are actually very useful to farmers because they eat termites, which are harmful to farming. Farmers are beginning to understand this benefit and the aardwolf is now a welcome guest on most farms!

Where do Aardvarks Live

What do Aardvarks Eat