Where do Dates (fruit) Come From

Dates are the sweet, edible fruit produced by the date palm (Phoenix dactylifera). This tree grows to about 23 m (75 ft) in height with leaves that can reach 6 m (20 ft) long. The fruit is relatively small (about 5 cm long and 3 cm in diameter) and grow in large groups of more than 100 dates. Date palms can be either male or female and the female plant must be pollinated by the male to grow fruit. In commercial crops this is usually done manually and in this way one male date palm can pollinate 100 female plants. Dates can be eaten straight from the tree, but are also commonly used in many sweet and savoury recipes. Let’s find out where this plant originated and where it is grown today.

Where do dates originate from? 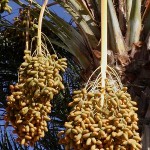 Dates have been cultivated for many thousands of years and there is evidence of date farming as early as 7,000 B.C. They were a staple food in the Middle East and due to this extensive cultivation it is difficult to accurately pinpoint their origin. However, most experts believe that dates originated from Iraq. From here they spread throughout the Middle East and parts of South West Asia. In later times, traders further spread this fruit to northern Africa and Europe (Spain and Italy). More recently, dates were brought to the Americas by the Spanish around 1765.

Where Do Coconuts Come From

Where do Peaches Come From