Where do Prairie Dogs Live

Prairie Dogs are a group of burrowing rodents best known for their warning call, which sounds similar to the bark of a dog (which is how they got their name). Despite their name, prairie dogs are not a part of the canine family and are instead members of the squirrel family. Prairie dogs are relatively small animals with a similar appearance to a squirrel. They are usually covered in brown fur, are about 30 cm (12 in) long and weigh 0.5-1.3 kg (1-3 lbs). There are 5 species of prairie dogs and each species has a different territory although the territory of some species overlaps. Let’s find out where these cute little animals live.

Where do prairie dogs live? 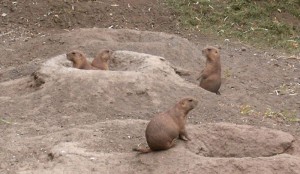 The Gunnison’s prairie dog are mostly found in the “Four Corners” region of the United States, with three quarters of the members found in Arizona and New Mexico.
The white-tailed prairie dog is found in the western parts of Wyoming and Colorado with small populations in southern Montana and eastern Utah.
The black-tailed prairie dog was traditionally found from Saskatchewan in Canada through to Chihuahua in Mexico, which includes 11 US States. It can still be found in this traditional range, but is no longer found in Arizona.
The Mexican prairie dog is only found in specific parts of northern Mexico. It has disappeared from much of its traditional range and is now considered to be an endangered species.
The Utah prairie dog, as the name suggests, is found only in the US state of Utah. This species is also considered to be endangered.

Habitat
Prairie dogs live in some of the harshest climates on the planet. They live at altitudes of 2,000 to 10,000 ft above sea level. The regions they live can exceed 38 °C (100 °F) in the summer and reach temperatures as low as ?37 °C (?35 °F) in the winter. This is one of the primary reasons that prairie dogs live in burrows. The burrows protect them from the elements and help the animals regulate their body temperature. These burrows are usually about 5-10 m (16-33 ft) long and 2-3 m (6-10 ft) below the ground.

What do prairie dogs eat?

Where Do Squirrels Live