Where is El Salvador Located

El Salvador (official title: Republic of El Salvador) is a small and densely populated country. It was part of the Spanish empire for many years and after independence from Spain in 1821 it was a part of a number of groups such as the Federal Republic of Central America and Greater Republic of Central America until 1898 when it again became an independent country in its own right. The country covers an area of just 21,040 square kilometers (8,124 square miles), which gives it a rank of 153rd largest country in the world. It’s population in more than 6 million and in terms of population density El Salvador is ranked 47th in the world. Population growth is also strong with the capital city of San Salvador being one of the fastest growing capitals in the world. By now you may be able to guess where El Salvador is located, but let’s take a closer look. 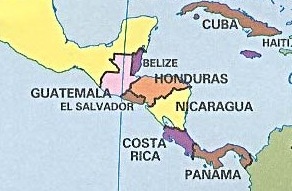 The following is a map of the world with El Salvador marked in red (with a circle to help you locate it). It is this map that shows just how tiny this South American country is. In fact, only two American states, Delaware and Rhode Island, are smaller! 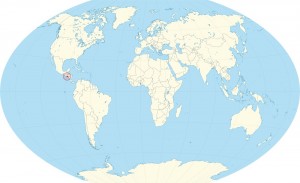