Germanium is a hard gray-white metal that is similar in appearance to silicon although, unlike silicon, it is never found naturally in its free form on Earth. It is a chemical element with the atomic number 32 and is represented by the chemical symbol Ge. It is a relatively rare element and is found in only a few minerals on Earth. Even in these minerals the concentration of germanium is quite low. It is for this reason that it was discovered relatively late compared with other similar elements. Let’s find out who discovered this rare element.

Who discovered germanium?
The existence of germanium was predicted by Dmitri Mendeleev in 1869, almost two decades before it was discovered. He named it ekasilicon based on its position on the periodic table. 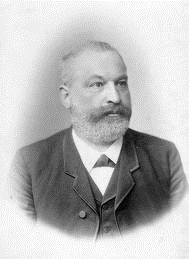 The path to the discovery of this element began in 1885 when a new mineral called argyrodite was discovered in Germany. The German chemist Clemens Winkler (pictured) decided to analyze this new mineral and he discovered that it was a combination of silver, sulfur and a new element that had not yet been identified. Winkler was able to isolate this element in 1886 and he decided to name it neptunium (the planet Neptune had also been predicted before it was discovered). However, this name was already proposed for another element so he named it germanium from the Latin word for Germany to honor his homeland. He was able to confirm the properties of the element a year later and he determined that the predictions that Mendeleev had made about the element were very accurate. This was an important confirmation of Mendeleev’s theory of periodicity.

Did you know?
About 120 metric tons of germanium are produced each year. The largest producers of this metal are China, Russia and the United States. The majority of this element comes as a by-product of sphalerite zinc ores. 35% of the worldwide demand for this metal is met by recycling.